Neurovascular function and sudorimetry in health and disease.

In this review of thermoregulatory function in health and disease, we review the basic mechanisms controlling skin blood flow of the hairy and glabrous skin and illustrate the major differences in blood flow to glabrous skin, which is, in essence, sympathetically mediated, while hairy skin is dependent upon neuropeptidergic signals, nitric oxide, and prostaglandin, among others. Laser Doppler methods of quantification of blood flow–in response to iontophoresis of acetylcholine or heat–and nociceptor-mediated blood flow have relatively uniformly demonstrated an impaired capacity to increase blood flow to the skin in diabetes and in its forerunners, prediabetes and the metabolic syndrome. This reduced capacity is likely to be a significant contributor to the development of foot ulcerations and amputations in diabetes, and means of increasing blood flow are clearly needed. Understanding the pathogenic mechanisms is likely to provide a means of identifying a valuable therapeutic target. Thermoregulatory control of sweating is intimately linked to the autonomic nervous system via sympathetic C fibers, and sweat glands are richly endowed with a neuropeptidergic innervation. Sweating disturbances are prevalent in diabetes and its precursors, and quantification of sweating may be useful as an index of diagnosis of somatic and, probably, autonomic dysfunction. Moreover, quantifying this disturbance in sweating by various methods may be useful in identifying the risk of progression from prediabetes to diabetes, as well as responses to therapeutic intervention. We now have the technological power to take advantage of this physiological arrangement to better understand, monitor, and treat disorders of small nerve fibers and the somatic and autonomic nervous system (ANS). Newer methods of sudomotor function testing are rapid, noninvasive, not technically demanding, and accessible to the outpatient clinic. Whether the potential applications are screening for diabetes, following poorly controlled diabetes subjects during alteration of their treatment regimen, or simply monitoring somatic and autonomic function throughout the course of treatment, sudorimetry can be an invaluable tool for today’s clinicians.

2.Gordon Smith et al, The diagnostic utility of Sudoscan for distal symmetric peripheral neuropathy. Journal of Diabetes and Its Complications2014; 28: 511–516

The diagnostic utility of Sudoscan for distal symmetric peripheral neuropathy.

Diagnosis of early distal symmetric polyneuropathy (DSP) is challenging. Nerve conduction studies (NCS) are often normal. Skin biopsy for intraepidermal nerve fiber density (IENFD) has better sensitivity, but is invasive. Sudoscan is a novel technology that measures electrochemical skin conductance (ESC; microSiemens, μS), which is thought to be proportionate to the number of functional sweat glands. This study evaluatedSudoscan’s diagnostic utility for DSP.

Sudoscan is a promising diagnostic test for diabetic and idiopathic DSP, with diagnostic performance similar to IENFD.

Cardiovascular autonomic neuropathy (CAN) is a common but often overlooked complication of diabetes. Sympathetic C-fibers innervating sweat glands can be impaired early on in patients with diabetes. In this study, SUDOSCAN, a new non-invasive device that assesses sudomotor functionwas compared to methods generally used for the investigation of CAN.

A total of 232 patients with diabetes were measured for heart rate variability (HRV) at rest and during moderate activity. Time and frequency domain analysis techniques, including measurement of the low-frequency (LF) domain component, were assessed during HRV testing. Ewing tests, as recommended by the French Health Authority, were also done. Electrochemical sweat conductance (ESC) was measured on the hands and feet, and a risk-score was calculated.

Using two abnormal Ewing tests as a reference for the area under the curve (AUC) of the receiver operating characteristics (ROC) curve for SUDOSCAN, the risk-score was 0.74, with a sensitivity of 92% and specificity of 49% for a risk-score cut-off value of 35%. For the ROC curve analysis using the LF power component during moderate activity at a threshold of 90 ms(2) (first quartile) as reference, the AUC was higher for the SUDOSCAN risk-score (0.77) compared with the standard Ewing tests [E:I ratio (0.62), 30:15 ratio (0.76) and blood pressure change on standing (0.55)]. Using a cut-off value of 35%, risk-score sensitivity and specificity were 88 and 54%, respectively.

SUDOSCAN, which allows quick quantitative assessment of sudomotor function, may be used for early screening of CAN in everyday clinical practice before resorting to the more sophisticated and specific, but ultimately more time-consuming, Ewing tests.

Assessment of small fiber neuropathy through a quick, simple and non invasive method in a German diabetesoutpatient clinic.

Sudomotor dysfunction is one of the earliest neurophysiologic abnormalities to manifest in distal small fiber neuropathy. SUDOSCAN® was developed to provide a non invasive, quick, simple and quantitative measurement of sweat function. The aim of this observational study was to assess sweat function in a diabetes outpatient consult clinic in Germany.

The study was conducted from February 2009 to March 2011 on patients of a diabetes outpatient clinic in Germany with type 1 and type 2 diabetes, and was conducted parallel to standard care. Sweat function was evaluated by measuring the electrochemical conductance (ESC) of the hands and feet. The method’s reproducibility between 2 devices and a follow-up according to insulin administration were also assessed.

This preliminary study shows that the assessment of small C fiber neuropathy can be performed non invasively, quickly and effectively in standard diabetes outpatient practice with very good reproducibility. The observation that electrochemical skin conductance improves with intensified insulin treatment must be confirmed in a clinical study performed on a larger population.

Quick and Simple Evaluation of Sudomotor Function for Screening of Diabetic Neuropathy.

Objective. The aim of this study was to compare SUDOSCAN, a new device to evaluate sweat function (reflecting peripheral small C-fiber status), with conventional measures of peripheral and cardiac neuropathy in patients with type 2 diabetes. Methods. 265 diabetic patients were tested for symptoms and clinical signs of neuropathy using Michigan Neuropathy Screening Instrument

(MNSI), vibration perception threshold (VPT) using biothesiometer, and cardiac autonomic neuropathy (CAN) using Ewing’s protocol. Sudomotor function was investigated with SUDOSCAN through measurement of electrochemical skin conductance (ESC) of hands and feet. Lower ESC is suggestive of sudomotor dysfunction. Results. Lower ESC at feet was significantly associated both with increasing symptoms (MNSI A) and increasing score on physical abnormalities (MNSI B). Lower ESC at feet was also significantly associated with increasing VPT by biothesiometry (P < 0.01), and with higher number of abnormal CAN results (P < 0.05). ESC was associated with postural fall in blood pressure (sympathetic abnormality) (P < 0.05), but not with heart rate variability (HRV) tests (parasympathetic abnormalities). Conclusions. Sudomotor dysfunction testing may be a simple test to alert physicians to peripheral nerve and cardiac sympathetic dysfunction. Ease of performance could make it useful in a busy diabetic clinic. Further studies with hard clinical outcomes are indicated.

Perturbation of pain sensation is considered one of the major initiating risk factors for diabetic foot ulcer. Sweat dysfunction leading to abnormal skin conditions, including dryness and fissures, can increase foot ulcer risk. The aim of this study was to evaluate Sudoscan™, a new, quick, non-invasive and quantitative method of measuring sudomotor dysfunction as a co-indicator of the severity of diabetic polyneuropathy (DPN).

A total of 142 diabetic patients (age 62±18 years, diabetes duration 13±14 years, HbA(1c) 8.9±2.5%) were measured for vibration perception threshold (VPT), using a biothesiometer, and for sudomotor dysfunction, using electrochemical sweat conductance (ESC) based on the electrochemical reaction between sweat chloride and electrodes in contact with the hands and feet. Retinopathy status was also assessed, as well as reproducibility between two ESC measurements and the effect of glycaemia levels.

ESC measurements in the feet of patients showed a descending trend from 66±17 μS to 43±39 μS, corresponding to an ascending trend in VPT threshold from <15 V to >25 V (P=0.001). Correlation between VPT and ESC was -0.45 (P<0.0001). Foot ESC was lower in patients with fissures, while VPT was comparable. Both VPT and foot ESC correlated with retinopathy status. Bland-Altman plots indicated good reproducibility between two measurements, and between low and high glycaemia levels.

Sudoscan™ is a reproducible technique with results that are not influenced by blood glucose levels. Sweating status may be aquantitative indicator of the severity of polyneuropathy that may be useful for the early prevention of foot skin lesions.

Sudomotor function assessment as a screening tool for microvascular complications in type 2 diabetes.

Non-invasive Screening of Diabetes Risk by AssessingAbnormalities of Sudomotor Function.

Methods: An EZSCAN score (0–100) was calculated using a proprietary algorithm based on the chronoamperometry analysis. We measured the score in 50 Chinese type 2 diabetes patients without DKD (urinary albumin–creatinine ratio [ACR] < 2.5mg/mmol in men or ACR < 3.5mg/mmol in women and estimated glomerular filtration rate [eGFR] > 90mL/min/1.73m2) and 50 with DKD (ACR ‡ 25mg/mmol and eGFR < 60mL/min/1.73m2). We used spline analysis to determine the threshold value of the score in detecting DKD and its sensitivity and specificity.

Physical inactivity is a modifiable risk factor for cardiovascular (CV) and metabolic disorders. VO2max is the best method to assess cardio-respiratory fitness level but it is poorly adopted in clinical practice. Sudomotor dysfunction may develop early in metabolic diseases. This study aimed at comparing established CV risk evaluation techniques with SUDOSCAN; a quick and non-invasive method to assess sudomotor function. A questionnaire was filled-in; physical examination and VO2max estimation using a maximal test on a bicycle ergometer were performed on active Finish workers. Hand and foot electrochemical skin conductance (ESC) were measured to assess sudomotor function. Subjects with the lowestfitness level were involved in a 12 month training program with recording of their weekly physical activity and a final fitness level evaluation. Significant differences in BMI; waist and body fat were seen according to SUDOSCAN risk score classification. Correlation between the risk score and estimated VO2max was r = -0.57, p < 0.0001 for women and -0.48, p < 0.0001 for men. A significant increase in estimated VO2max, in hand and foot ESC and in risk score was observed after lifestyle intervention and was more important in subjects with the highest weekly activity. SUDOSCAN could be used to assess cardio-metabolic disease risk status in a working population and to follow individual lifestyle interventions.

Background: Electrochemical skin conductance measurement is an active electrophysiologic method in which incremental low direct voltage is applied on the skin. It generates a current due to reverse iontophoresis which previous studies suggested to be mostly related to chloride anion movements. As sweat chloride movements upon electric stimulation were likely to be impaired in cystic fibrosis (CF) patients, we designed a proof-of-concept study to measure electrochemical skin conductance in CF patients and control subjects and to test the ability of this method to discriminate CF from controls.

Conclusions: These results show that electrochemical skin conductance which is easily and rapidly measured is abnormal in CF patients.

Sudomotor dysfunction may be an early detectable abnormality in diabetic small fiber neuropathy. The aim of this study was to evaluate the efficacy of Sudoscan™ (Impeto Medical, Paris, France) in detecting diabetic neuropathy (DN), in comparison with other standardized tests, in patients with diabetes mellitus (DM).

Sudoscan is a promising, sensitive tool to detect neuropathy in patients with DM. This is a very simple, easy-to-perform test that can be done in the clinical setting in 3-5 min 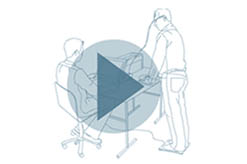